A good hatchback vehicle is an ideal companion on snakey roads and long drives. When it comes to hatchback cars, the first thing a buyer usually looks for is fuel efficiency. Once that is taken care of, other factors come into play, such as the car’s agility and how well it enables the driver to make their way through traffic without much hindrance swiftly.

If you want all of these needs to be taken care of proficiently, the Hyundai Veloster Turbo is a perfect choice to make. But the market for hatchback cars is as competitive as it gets. In modern times, the competition in the hatchback car market is stiffer than in any other kind of car market.

Primarily because it is easier for more car companies to manufacture hatchbacks in terms of investment than to produce luxury cars, let us read into a few cars that closely compete with the Hyundai Veloster. 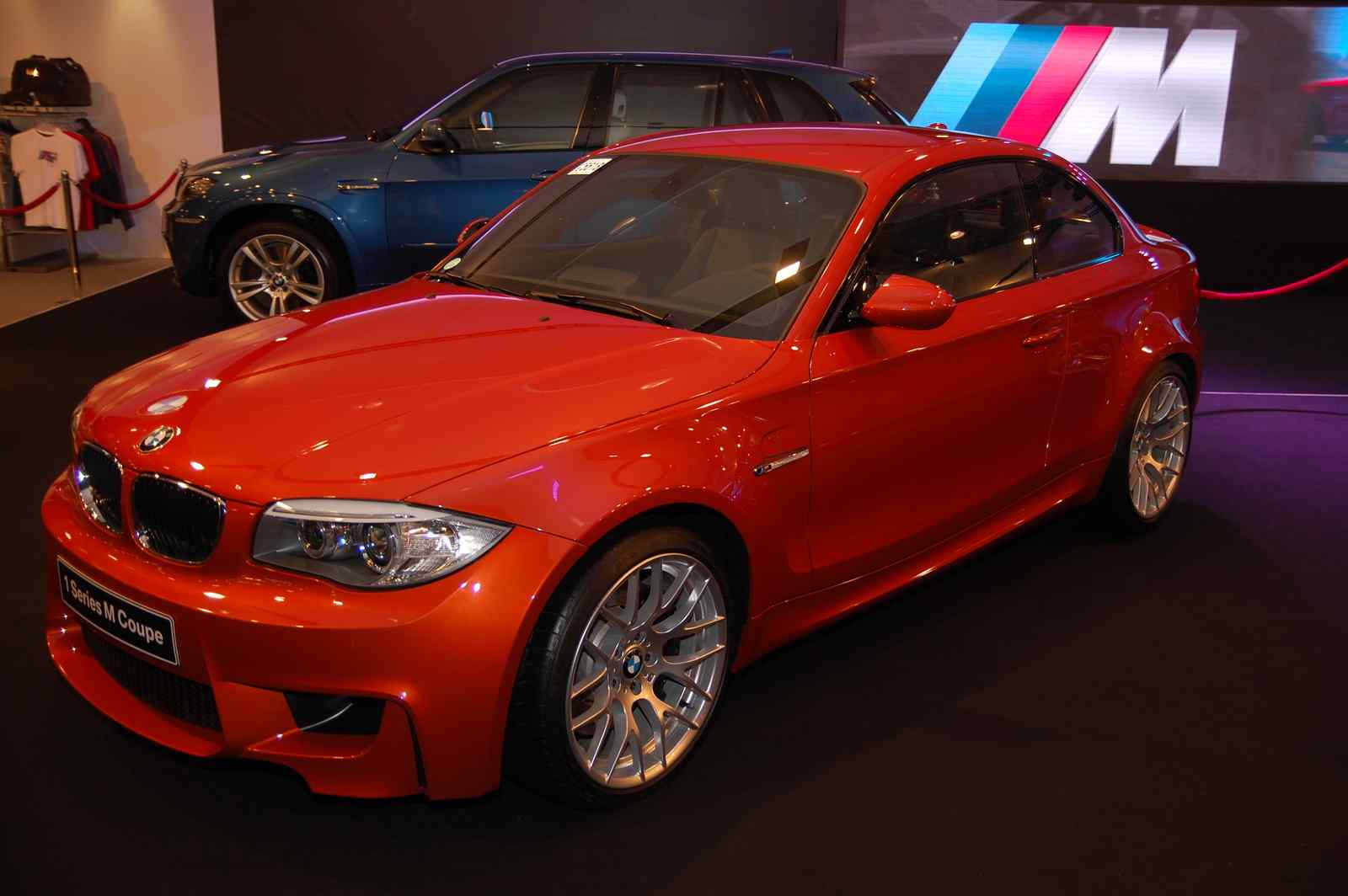 Although many have critiqued its front grille’s appearance, the BMW series 1 stands out to be one of the top choices if you want to go for specs and class. The series one cars come with an attractive pair of 18″ alloy wheels, and the sides of the cars are red, which gives them an exquisite look.

The rear end of the series one cars is their most stylish feature. The spoiler at the back end of these cars gives them an athletic look, while the great diffusers and the very alluring exhaust pipes are a jaw-drop.

The series-1 cars are as spacious as hatchbacks, so one does not need to worry about cramped leg space. The cockpit of a BMW series one car has a well-sized gear pod and is well-equipped with features like climate control, easily controllable audio, and a surround sound system. It also has an adept infotainment system that is not just touchscreen but also has wireless compatibility with both Apple CarPlay and Android Auto. The touchscreen is 10.25″. 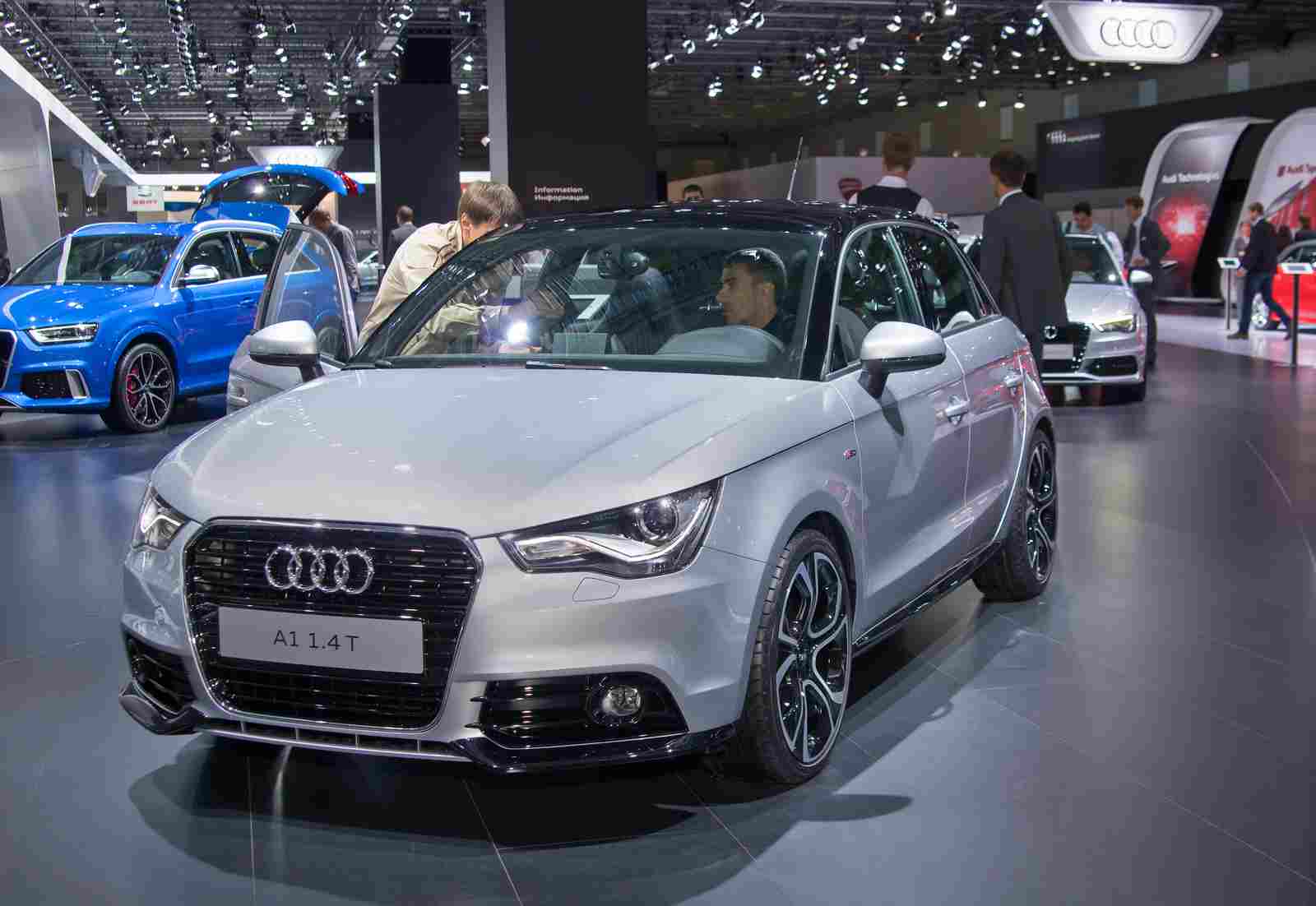 In its last update, the Audi A1 has significantly changed its looks and has become more robust in appearance. A1’s S-line range of cars comes with a very attractive and sporty look, while its 18″ alloy wheels are absolute head-turners. The update has also come with an increase in the cars’ dimensions.

The latest version is observably larger than its predecessor; at the same time, it has not made the car look disproportionately huge, as the A1 continues to pose as a sleek and agile hatchback car that can deftly move through traffic and twisted roads.

The Audi A1 comes equipped with a range of technologies. The infotainment system of the car is supremely attractive. The touchscreen gives the driver a premium feel with extremely clear graphics and easily navigable menus. It is wirelessly compatible with Apple CarPlay and Android Auto and connected to Audi Connect’s sophisticated media system.

This system has many features like real-time maps, traffic and hazard updates, information on fuel prices, a Wi-Fi hotspot, parking assistance, weather updates, and Google Maps. That’s not all; it also offers a wireless charging facility.

Apart from being great tech, the Audi A1 is also very spacious. It can easily fit four adults inside it and offers decent leg space. The car seats also come with ISOFIX child seat attachment points, and the seats are pretty evenly flat, which allows these external child seats to attach themselves to them easily. 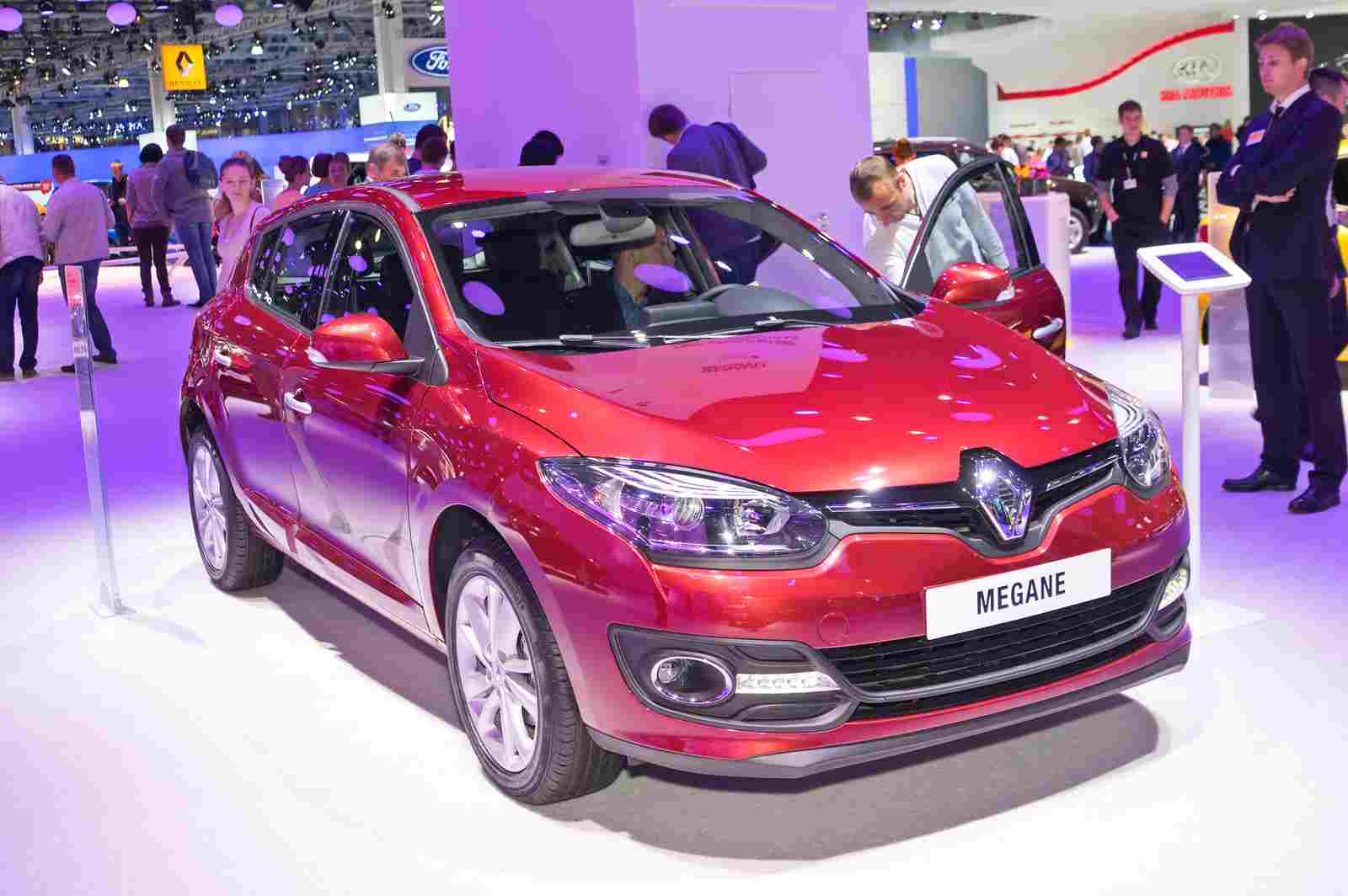 The new Renault Megane has a sturdy and muscular look, an attractive feature in a hatchback. It comes with a pair of slick 19″ alloy wheels, which adds to its glamour. This car comes with a central exhaust at the rear end and its front guard aid in effective air extraction.

It also has a diffuser at the rear end that provides downforce. The car’s front seats have a special design to cater to day-to-day driving and provide the added bolstering that one looks for if they plan to take their car to the tracks.

The 8.7″ infotainment touchscreen of the Megane is pretty advanced. It displays performance analytics such as wheel angle, braking, and acceleration. It also has wireless compatibility with Apple CarPlay and Android Auto and in-built GPS navigation.

The car has a dual-zone climate-controlling option with folding side mirrors that can heat to avoid blurriness due to condensation. The stereo sound system of the car is pretty good, and it allows you to upgrade it as well. You can install a 10-speaker Bose sound system compatible with the car. 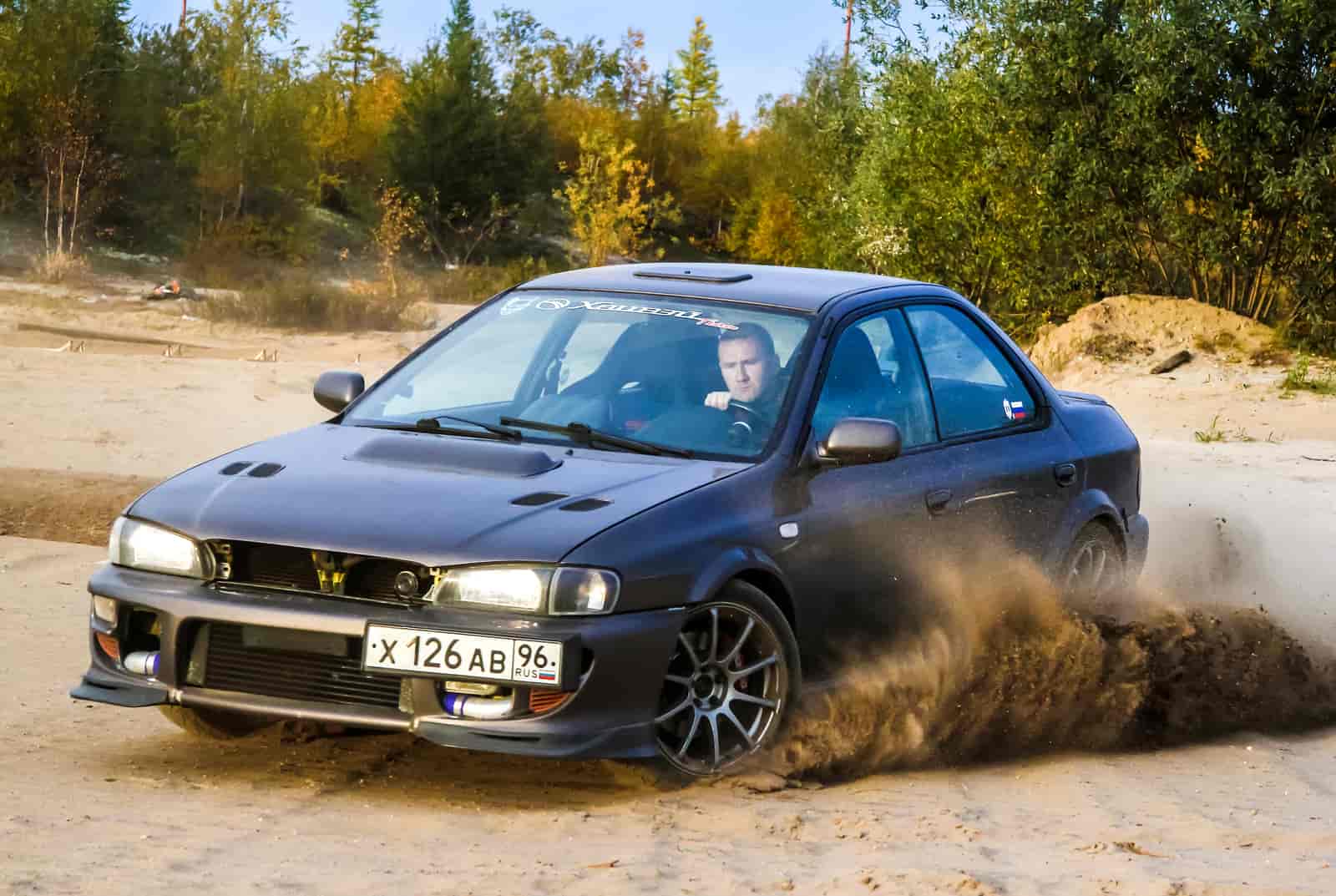 The Subaru Impreza has made very few changes in its looks in its latest update. Chiefly by installing larger alloy wheels and a slightly revamped frontal grille. The car has a stocky and squarish look on its sides and back. Impreza’s cabin is very spacious, making for comfortable sitting and offering generous leg space. The car’s interiors offer comfortable and neatly designed seats and the company’s characteristic steering wheel.

The infotainment system comes with an 8″ touchscreen, compatibility with Apple CarPlay and Android Auto, an in-built GPS, a CD player, a DAB radio, a multi-information screen of 4.2″, a multi-function display screen of 6.3″, a key-less push-start option, dual-zone climate control, and an eight-way power-adjustable driver’s seat. The car’s front seats can be heated, and all the seats are leather-coated. 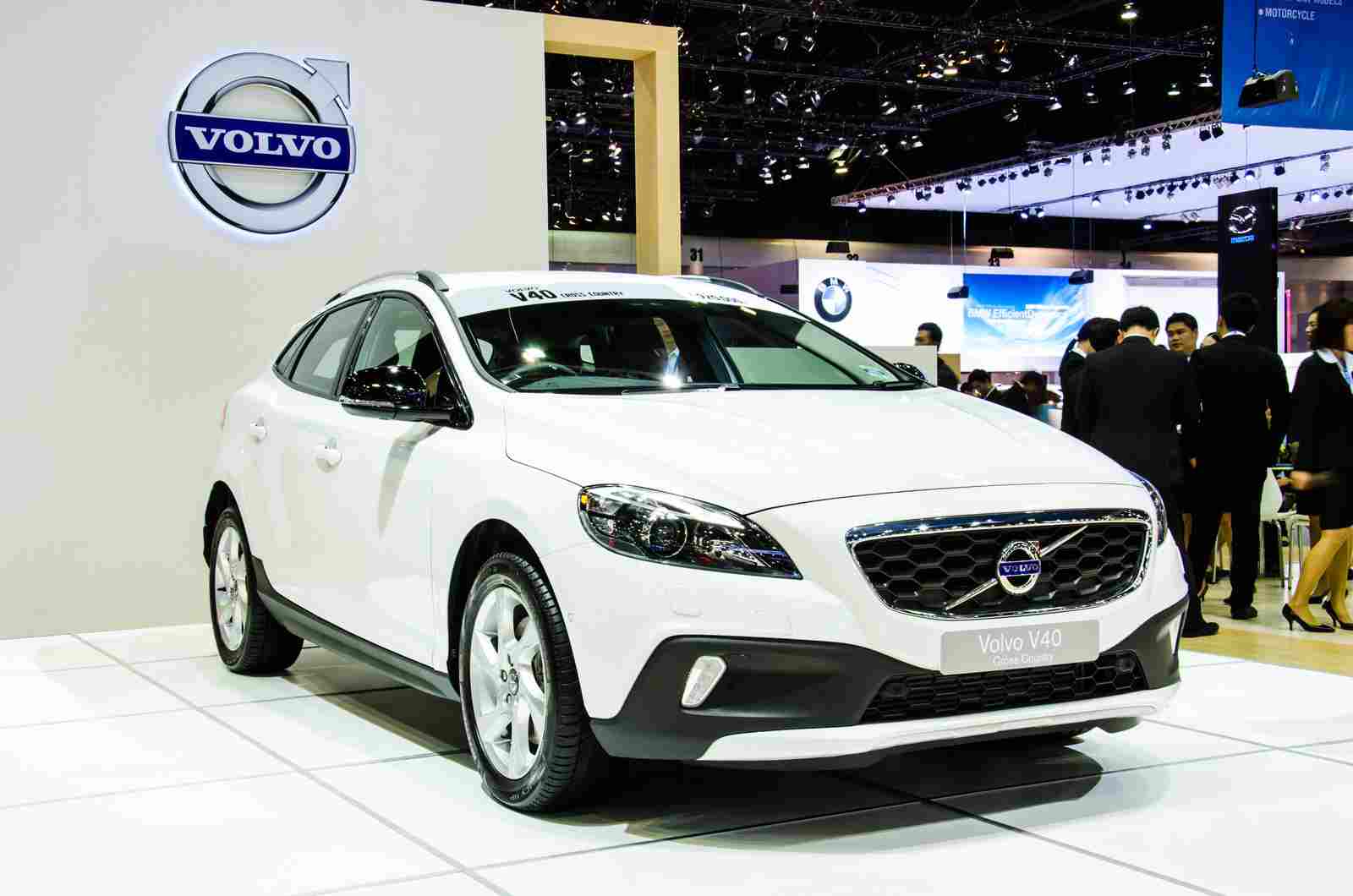 The Volvo V40 was first released in 2012 and has been around ever since, competing adeptly in the advancing market with its periodic and clever updates. The very fact that V40 has been able to maintain its relevance in the market to date doesn’t just make for an inspiring story but also makes it a viable choice for a smart and dependable purchase.

The latest Volvo V40’s interiors are neat and sophisticated, and the interface of the multimedia system has been freed of the buttons and replaced with a large touchscreen. The insides have a very tidy and minimalistic look which is soothing for all.

The steering wheel has a leather finish with the logo inscribed in the center with aluminum, and the cabin remains as elegant and spacious as always. The exterior of the V40 is supremely sturdy and has that dependable look to it. It also has a pair of 17″ alloy wheels.

The car also has parking sensors for both the front and rear ends, an auto parking system, power-adjustable front seats, and dual-zone climate control. It also comes with a very well-designed safety system. The absence of Apple CarPlay and Android Auto might disappoint some, but many customers can overlook it. 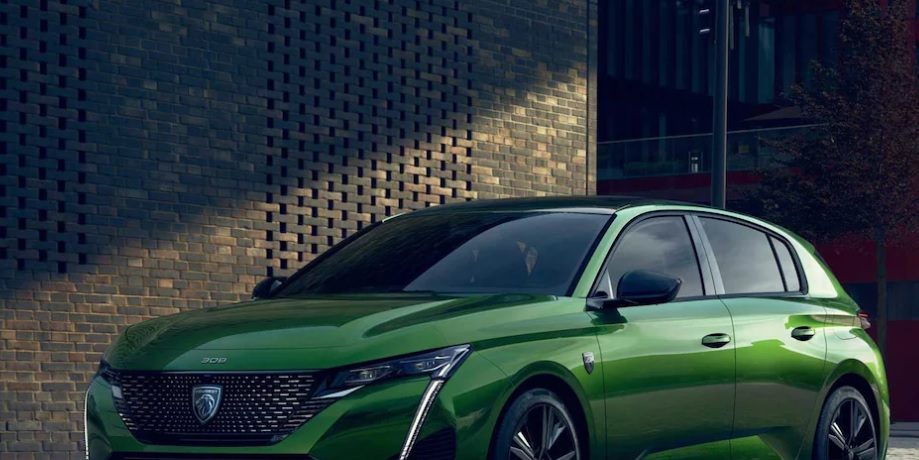 A car comparable to the Hyundai Veloster, the Peugeot 380 is a testament to its brand, known for its special expertise in SUV design. The car in question is a treat to drive and park; it hardly lets on its heft. It has a two-tiered and textured Peugeot grille that lends the car a simple, elegant look, while the distinctive rear-end design goes a step further in enhancing the same.

The interiors are designed to appear minimalist, with the doors swathed in soft-touch materials. An expensive add-on you can avail of is the moonroof that spans the entire cabin length.

The car is spacious yet compact enough to fit into standard parking spaces, with an impressive front-seat space layout. Available technology includes a 9.3-inch screen with Apple CarPlay and Android Auto and the expected features requisite for standard navigation and steering wheel controls. 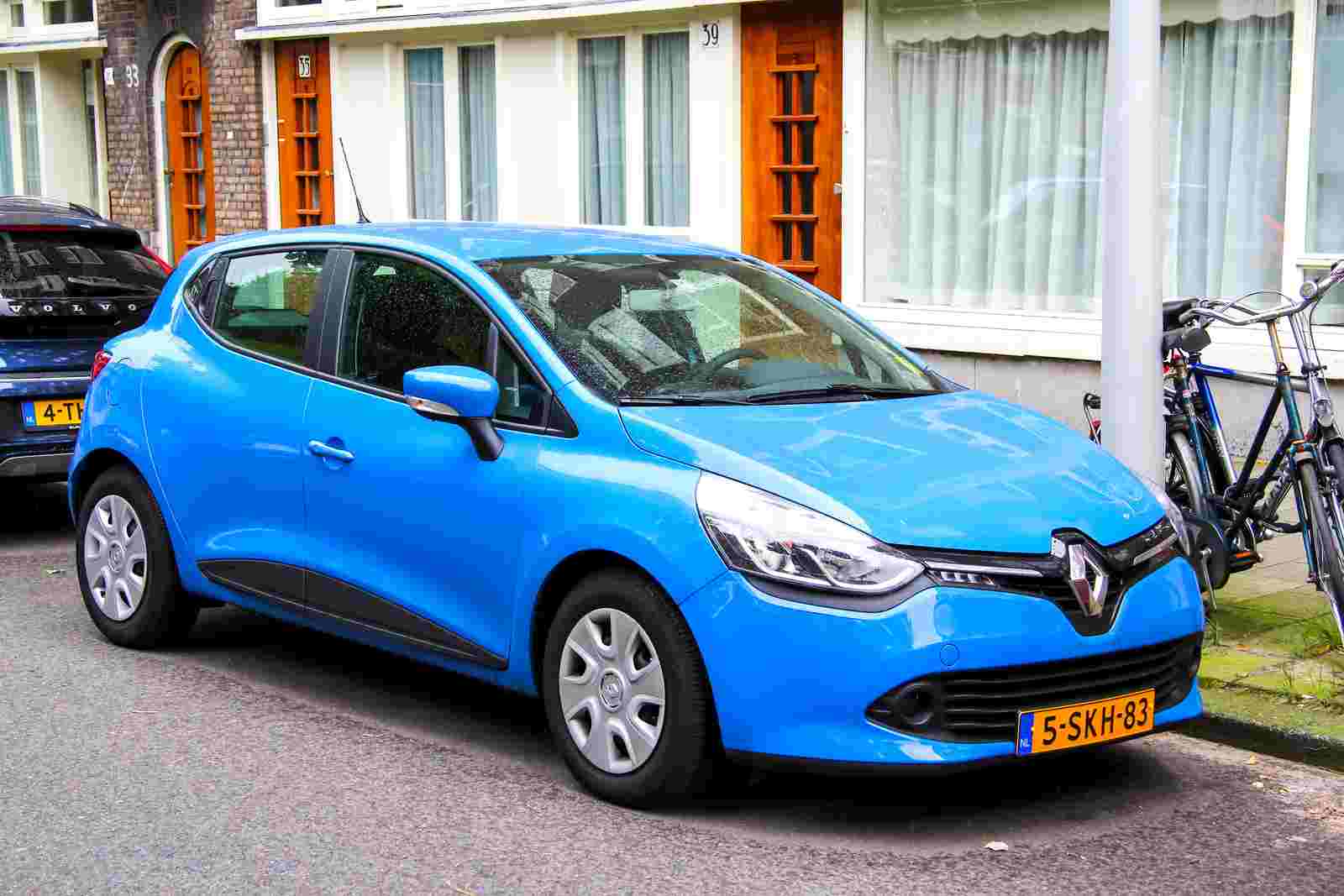 A slight deviation from the others on the list, the Renault Clio is a stylish car. It is slimmer-hipped, has a cleaner design, and packs a 1.6l turbo engine. A small, handsome car, it has undergone some recent changes.

The headlights have been reworked in newer models, as have the front and rear-end bumpers. The flat signature lighting is an improvement and acts as DRLs at the bottom corners of the front bumper.

The car works well ergonomically and comes with smaller cars’ advantages. The interiors are snug, but the legroom proves itself quite adequate. The Renault Clio comes with a host of tech features, including a four-speaker stereo, reversing camera, cruise control, auto wipers, auto LED headlights, launch control, sensors, daytime LEDs, satellite navigation, and a tyre inflation kit handy for accidents.

The stereo comes with a 7″ touchscreen software, a DAB digital radio, Bluetooth, and USB. Availing an optional RS monitor will give one access to a fully functional telemetry system. 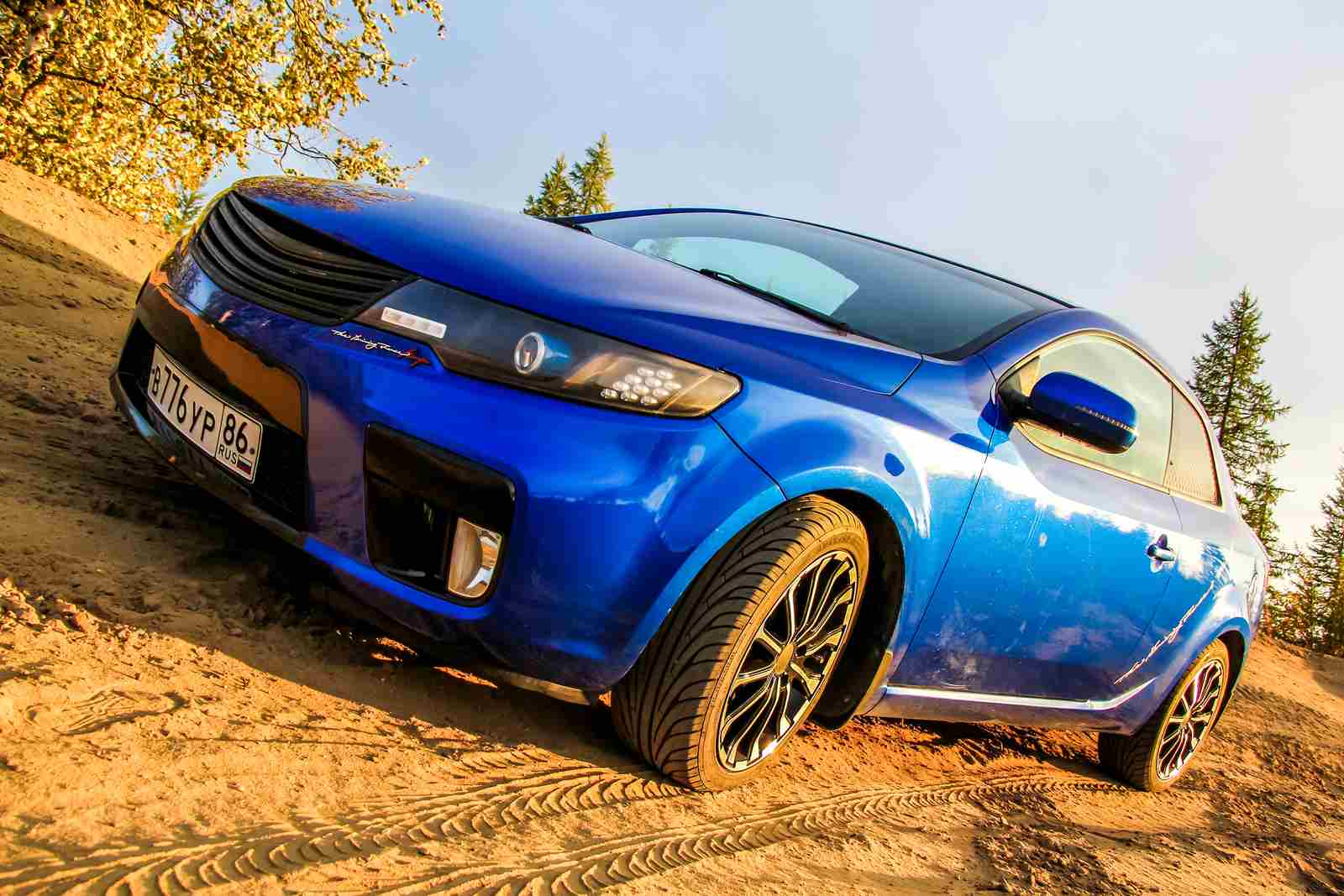 A best-selling model in the small car industry, the Kia Cerato is worthy of its status in more ways than one. A notable change in the Cerato is a smaller, more stylized version of the logo – a sure sign of change and rejuvenation within the company. The front end of both the hatch and the sedan undergoes a revamp.

The grille has been refurbished and now blends into the headlights. Additionally, fog lights have been integrated into the air intake to modernize the car for future growth. Side tail lights and a new bumper style add greater symmetry and flow to the car, with the manufacturers offering two engine choices in newer models.

The Cerato offers a range of four models, namely, S, Sport, Sport+, and GT. The GT boasts a 1.6l turbocharged unit and a sophisticated suspension package to justify its premium position among the four.

The S features an 8″ screen connected to Apple CarPlay and Android Auto, while the Sport and Sport+ models get the upgrade of a larger(10.2″) touchscreen.

The Cerato GT has a host of extra tech implements like an eight-speaker JBL sound system, a wireless charging pad, and a sunroof. 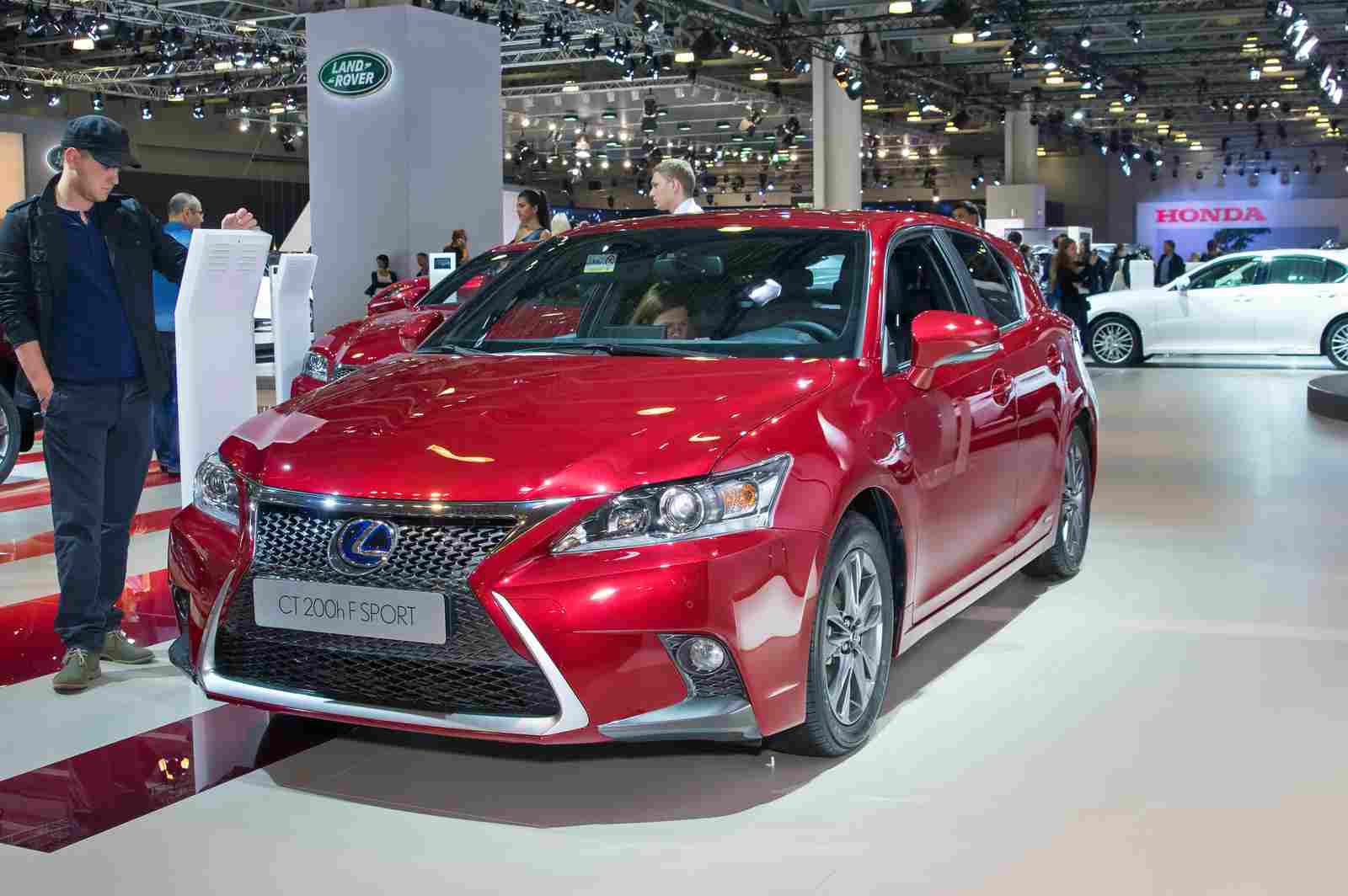 The Lexus CT makes the Japanese luxury vehicle brand’s roster and this list for the same reasons. One of the market’s main advantages is its practicable size- it is small but well-formed, thereby allowing easy navigation.

The base model has undergone some external revisions over the years-new 17-inch alloys, a black roof treatment, and L-shaped LED driving lamps to match their counterparts in the tail-end.

As far as the car’s tech features are concerned, one of the newest improvements includes a wide-format 10.3″ touchpad on the top of the center console. The F-Sport, a sportier version of the base model, justifies a jump in price by the presence of a list of useful implements.

New gear includes an Auto Emergency Braking System, adaptive cruise control, and lane departure warning with steering assistance to prevent erratic driving. However, the steering wheel controls seem to have deteriorated slightly since their last revision- no doubt a consequence of the advent and addition of the latest driver aids. Since their last installment, the front and rear end bumpers have undergone fresh styling.

No matter how good a hatchback car the Hyundai Veloster might be, several other cars in the market for hatchbacks offer very stiff competition. Hence, one should do thorough market research before making a purchase.

If you are someone who is looking forward to getting yourself a new hatchback car, a thorough read of this article will surely help in your pursuit! It will help one find the best car suited to their choice and curb the chances of later regrets.